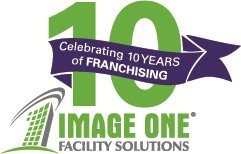 Rolling Meadows, Ill. (January 12, 2021) – To celebrate Image One’s tenth anniversary, founder and CEO Tim Conn is pleased to announce the commercial cleaning franchise is rolling back its franchise fee to reflect the year it all began.

Image One will offer a reduced franchise fee of $29,750, what it was in ten years ago, to the first 10 franchisees who sign on in 2021. Additionally, for each of those 10 franchisees’ 10 months in business, Conn and Image One will match their marketing contribution at 50 percent of their spend.

“We’ve had a strong first decade in franchising, and in a year when hardworking, determined Americans have been hit with adversity unseen in year’s past, Image One recognized there would be no better way to celebrate than by giving back with a deeply reduced franchise fee,” said Conn.

Founded by Tim Conn and Mike Schuchman, the company is unlike any other commercial cleaning franchise in the industry, priding itself on its franchisee training and support, consumer-facing and franchisee-facing technology, a focus on family and lack of area developers/territory managers. Image One offers a comprehensive list of commercial services including: daily janitorial, carpet cleaning, hard surface floor care, window washing, vacancy services, move in/out cleaning, post-construction cleaning and disinfectant cleaning services. In fact, in 2020 Image One introduced electrostatic disinfection to keep office settings healthy.

One major differentiator that has set Image One apart from its janitorial competitors is the brand’s focus on technology. In 2012 Conn and his team launched a first-of-its-kind iPad Survey App to assist its franchisees in bidding and estimating – something no other janitorial franchise had introduced. Then, in 2014, Image One introduced iFast, another technology-based, all-inclusive system allowing franchisee and franchisor to keep track of clients and team members with all necessary communication in one place. Franchisees love the ease of use and support Image One’s technology brings, and they’ve proven to be a great resource for franchisees looking to keep labor costs low.

As Image One continued to develop high-level technology for its franchisees, the franchise saw sustained growth across the country and received several accolades from franchise industry-media.

Image One now has franchisees growing the business throughout Illinois, Florida, Texas, Colorado, and Ohio.

Even with Image One’s industry-leading advancements in technology and recognition, Conn says he’s most proud of the lives that have been changed within the franchise system.

“One of the most meaningful moments of the last ten years was when one of our longtime franchisees, Jason Avila, surpassed $1 Million in annual revenue in 2019,” said Conn. “Seeing him reach that level of success proves that we’ve created a fruitful franchise system that can truly change lives. Years ago when I ran an independent janitorial company, my best gross revenue was less than half of what Jason and his team produced in 2019, so it’s extra rewarding that our system has allowed our franchisees to grow a business to more than double what I was able to do in the early years.”

Next for the brand Conn anticipates steady growth over the next five years, with five to 10 new franchisees in each of the next five years, noting that finding candidates that will be a good fit culturally is the top priority. Image One’s ideal candidate is involved in the day-to-day operations and joins the brand with sales experience or a customer service background. Image One franchisees aren’t afraid to get their hands dirty (or clean) to get the job done and help their team members. Most importantly, this person must align with the brand’s mission and core values – honesty and integrity are of utmost importance and that is something you cannot teach.

Specific states Image One is looking to expand in over the next decade include Arizona, Colorado, Florida, Illinois, Indiana, Iowa, Michigan, Ohio, Texas and Wisconsin.

Image One is a commercial cleaning services business. The franchise model was formed on the principles of transparency, training, and top-notch financial and customer service support. It is regularly recognized as a top franchise by third-party franchise and business publications, including CNBC.com, Entrepreneur.com and Franchise Business Review. Image One provides franchisees with customer support for their business, ongoing training, along with assistance with billing, equipment, and sales training. Image One has commercial cleaning franchise locations across the Midwest and Southeast, including Chicago, Cincinnati, Dallas, Denver, Detroit, Fort Myers, Nashville and Orlando. Franchise territories are available nationwide.