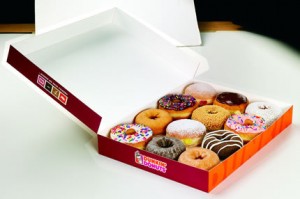 Love the idea of owning a Dunkin Donuts Franchise? Have you tasted their soft, puffy donuts and their fragrant brewed coffee? Delectable isn’t it? That’s the Dunkin Donuts Guarantee!

With a franchise business as great and profitable as Dunkin Donuts, no wonder, there are thousands of the donuts store emerging from one territory to another. Franchisees find Dunkin Donuts easier to manage, and definitely profitable.

Brand Strength - with their 120 years of proven and tested franchising experience, Dunkin Brands is definitely a “go-to” in terms of finding the best franchise opportunity. Dunkin Brands is also the home of Baskin-Robbins, a very popular ice cream parlor which is based in Massachusetts and was founded in year 1945.

Popularity - do you know anyone who does not know anything about Dunkin Donuts? Oh well, the company is indeed popular.. very very popular. Even kids know what Dunkin Donuts is! More so, according to some statistics which was released last 2012, Dunkin Donuts had the number one share of their various product servings (coffee, donuts, muffins)  in quick service restaurants.

Customer Service - for six years (continuously) Dunkin Donuts was awarded with the highest rate in the QSR industry (Brand Keys Customer Loyalty Index from 2006 to 2012).

Support - Dunkin Donuts provide great professional support. The company has a team of experienced, dedicated franchising support professionals, including a Franchising Manager, Real Estate Manager, Construction Manager, Operations Manager, Field Marketing Manager, and many others, whom you can count on for any help that you need in order for your business to continuously grow.

Demand - certainly, their donuts, coffee and other food choices are highly in demand 24/7. Furthermore, the company are finding ways to innovate their services, products and special deals and offers and assure that these are loved and will be loved by their customers.

The History of Dunkin Donuts:

For now, let us travel back to the softer days of Dunkin Donuts.

Dunkin Donuts was founded on year 1950 by Bill Rosenberg. The first franchise agreement was signed on year 1955 at Worcester, Massachusetts. On 1963, the 100th Dunkin Donut store was launched.

Dunkin Donuts started to franchise internationally on year 1970; giving them the opportunity to open their first international franchise in Japan. From then on, various products were launched. Hence, Munchkins (donut hole treats) were introduced on year 1972.

The process that you will take in order to own a Dunkin Donuts Franchise is normally the same thing – as how other franchise businesses do it.

First, you will need to submit some necessary documents including the application form, then the Dunkin Donuts Franchise Team will contact you for further details. You will then need to provide the company with some proof of assets, plus, the company will check your credibility and financial status. Next, after the verification processes and if you further qualify, you will then be able to meet the company Manager and choose your territory. Upon choosing your desired area, you will then be asked to submit some financial documents, sign some agreements, and perhaps, this would be the time when you will be requested to settle the franchise fees, and other expenses. Once successful, you are now welcome to open your first franchise business!

So, are you interested in owning a Dunkin Donuts Franchise? That would be one great opportunity of owning a business, and creating a successful path on your career. For more franchise ideas, you may visit our homepage and see the complete list of available and profitable franchise businesses of today. For any questions about the franchise list, feel free to contact us by providing your details on the contact form.